This apple was first noted in 1890 by the Catawba County Nursery of Newton, North Carolina. According to the nursery, Keener Seedling originated in Lincoln County, North Carolina, where it was known as Rusty Coat. In Lee Calhoun’s book, Old Southern Apples (2011), he notes that a Mr. Keener of Lincoln County had a land grant along Leeper Creek where he first grew Keener Seedling. Around 1880 a mining engineer married the daughter of Mr. Keener and purchased 66 acres of the Keener land where he began to propagate and distribute Keener Seedling throughout the region.  Fruit is small to medium, rounded, sometimes flattened on the ends. The skin is completely covered with brown russet with occasional red stripes barely showing through the russet. Small tan or whitish dots are scattered across the skin’s surface. The white flesh is somewhat juicy, crisp, fine-grained with a pleasant subacid nutty flavor. Ripens in early October and is considered a good keeper. 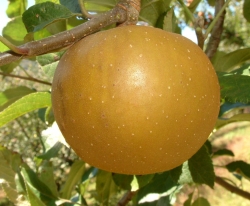