Home / Virginia Beauty Story
In the 1905 edition of the Yearbook of the Department of Agriculture (USDA), pomologist William A. Taylor of the Bureau of Plant Industry describes Virginia Beauty in the chapter titled, “Promising New Fruits”. The earliest known publication about this apple appeared in the Report of the Pomologist of the Department of Agriculture  in 1895 but it was the 1905 Yearbook which first introduced this wonderful apple to the American public. 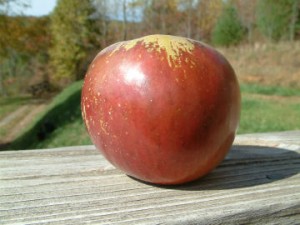 The original tree arose in the early 1800’s on the farm of Zachariah Safewright of Carroll County, Virginia, then a part of Grayson County. The tree began bearing fruit in 1826 and soon became well known locally for its mild, sweet flavor and glossy, brick-red color. An experienced grafter in the region, Martin Stoneman, collected scionwood from the tree and began distributing trees throughout Carroll, Grayson, Wythe and Pulaski Counties under the name “Zach” or “Zach Red”.

Around 1850 Mr. Stoneman renamed the tree Virginia Beauty but it was many years later in 1869 that the apple really gained significant attention when the Franklin Davis Nursery in Richmond began commercial sales of Virginia Beauty and promoting its many outstanding qualities. 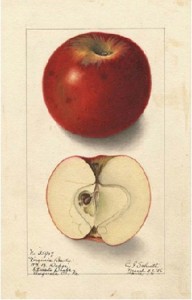 The tree is highly productive in most soil types, including heavy clay soils typical of the Piedmont region of central Virginia and North Carolina. A 1908 agricultural bulletin from North Carolina recommended the apple for growing in the mountains, Piedmont and coastal plain. The 1905 USDA Yearbook recommended Virginia Beauty for “like latitudes, at least as far west as eastern Nebraska.”

In Lee Calhoun’s wonderful book, Old Southern Apples (see Bibliography), he believes had not Red Delicious come along about the same time, Virginia Beauty would have become the most important commercial apple in the South. Virginia Beauty simply could not compete with the growing public demand for Red Delicious and, sadly, was pushed aside and soon became a rare variety. We take pride that we have played some role in helping to restore this great old apple to the public domain for others to savor and enjoy.

A few years ago we were contacted by descendants of Zach Safewright who had learned of our efforts to preserve old heritage apples. They asked if we could graft a few trees of Virginia Beauty so that they might share trees with other family members. We felt honored helping to return the apple to the family from which it had originated generations before. In a sense, we had helped the apple come full-circle, back home to Virginia.