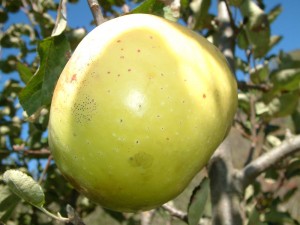 Over the last 30 years I have given a lot of public lectures about our work collecting and preserving American heritage apples. During these presentations, I always made a point to encourage the audience to develop an appreciation for the astonishing diversity of apples, noting there is simply no other fruit with the incredible range of size, color, flavor, shape, texture or aroma as Malus pumila, the common apple.

When giving these talks, I sometimes discuss the dazzling array of coloration exhibited by the many strains of Limbertwig apples or marvel at the depth, complexity and intensity of flavors inherent in the late maturing varieties. I often talk about some of the oddly-shaped apples such as the elongated and tapered Black Gilliflower or the weirdly flattened Bryson’s Seedling. When the discussion turns to the issue of apple size, there is one specific variety I always use as a prime example of what defines a really big apple – the gargantuan, mind-boggling Gloria Mundi!

We have a number of very large apples in our collection, most notably Wolf River, a huge and extremely popular cooking apple which originated in Wisconsin in 1856. Some other varieties larger than most would include Tompkins County King (New Jersey, 1800’s), Spigold (New York, 1962), Fall (Pound) Pippin, Twenty Ounce (New York, 1800) and Bismarck (New Zealand, 1800’s). While these varieties are rather huge when compared with standard “grocery store” apples, they cower in fear when placed in comparison alongside the massive Gloria Mundi! 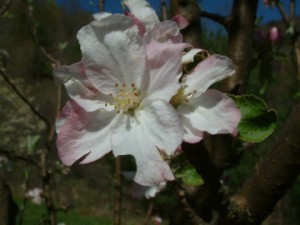 As described in Lee Calhoun’s ground-breaking book, Old Southern Apples, Gloria Mundi is most certainly the largest apple ever grown in the United States. Calhoun tells of one very unique specimen described in the 1860 edition of American Agriculturist magazine as measuring an incredible 18 inches in circumference and weighing an unbelievable three and a half pounds! We have never produced an individual fruit of this magnitude but two years ago we raised a Gloria Mundi which tipped the scales at a full two pounds! We kept this apple for a couple of months and carried it to several fall festivals that season where we placed it on display along with a couple of dozen other varieties. The effect on visitors to our display booth was absolutely amazing! Passersby would glance over at our display table, do an immediate double-take and then scurry over for a closer look to confirm what they saw was real! It was fascinating watching the varied reactions as folks stared in disbelief at the monstrous apple lying before them. Many felt compelled to actually touch the apple, to feel the physical weight and heft in their hands in order to verify for themselves that this apple, this freak of nature, was indeed…Real!

Sadly, it cannot be said that Gloria Mundi has a high-quality flavor as big and bold as its grand size. In fact, according to Calhoun, catalogs from nurseries in Virginia and North Carolina in the 1800’s advised buyers to be aware the apples are “not profitable for general culture” and are “cultivated only on account of its very large size”. The flavor is a bit tart and unassuming and is at its best when used as a cooking apple. It is good when fried in butter and flavored with sugar or honey and cinnamon. It also makes a better-than-average apple butter.

Some reference sources imply the tree is difficult to grow, being generally unproductive and requiring extra-rich soil to produce the largest fruit. We have not found this to be necessarily true in our case as our orchard trees thrive and produce quite well most years. Admittedly, there is a great deal of variability in the size of the fruit year-to-year, so it might be a bit unrealistic to expect a tree full of two-pound apples every season but, even in an “off season”, when the apples fail to reach mammoth proportions, they will still be the predominant apple in the orchard in terms of sheer size alone.

The origins of Gloria Mundi are unclear with historical literature attributing its discovery to several different locations. Much of the literature tracing the roots of this giant apple support the claim the apple arose before 1800 on the farm of Mr. Crooks of Red Hook, New York while other sources contend the original tree was discovered near Long Island, New York. The issue becomes even more confusing and convoluted by the fact that Gloria Mundi is believed to be the same apple as Baltimore Monstrous Pippin, an enormous apple which originated in Baltimore, Maryland in 1780. Adding to the confusion, Gloria Mundi became a popular home variety in the South and, according to extensive studies and comparisons of large, green apples grown in this region, Gloria Mundi was raised and sold under many different names including White Bausel, Balsam, Notley P No. 1, World’s Wonder and North Carolina Greening.

So, if you’re looking for colorful, attractive apples with world-class flavor, then Gloria Mundi will be a huge disappointment. But, if you want to amaze and astound your friends and neighbors with apples approaching the size of small honeydew melons, pull out a bag of Gloria Mundi apples and let the conversation begin!