A once popular early summer apple, Bevan’s Favorite originated in Salem, New Jersey in 1842. It became a Southern favorite and was widely distributed in North Carolina as late as the 1930’s before fading into obscurity. Lee Calhoun of Pittsboro, NC is credited with rediscovering the apple in 1985 when he found a lone tree in Alamance County, NC. Fruit is medium in size, slightly conical with greenish-yellow skin with broad red striping mostly on the sunny side. The white flesh is crisp, moderately juicy with a fine-grained texture. Ripens in July and is not a good keeper. 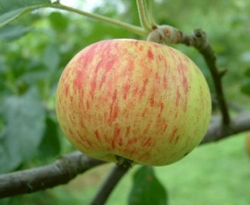