There is much controversy concerning the origin and true name of Blacktwig. Once thought to be a synonym of Winesap, over the years confusion has reigned regarding its relationship to Mammoth Blacktwig and Paragon, all of which are thought to be seedlings of Winesap. Today it is somewhat accepted that Mammoth Blacktwig and Paragon are separate varieties lumped under the catch-all name of Blacktwig, but that depends on with whom you speak. Despite the arguments, Mammoth Blacktwig and Paragon are almost identical in appearance. Both are medium to large with greenish-yellow skin mostly covered with dark red and indistinct dark red striping. The flesh is yellow, firm, and juicy with a mild subacid flavor reminiscent of Winesap. Ripens September to October and is a good keeper. (For a more in-depth discussion of these varieties, see Calhoun’s excellent book, Old Southern Apples.) 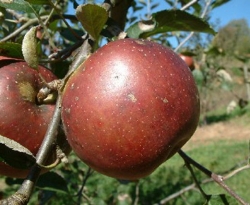 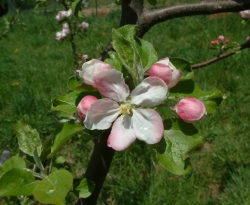