A long-time Southern favorite, Carolina Red June is believed to have originated in the early 1800’s in Tennessee. This apple has long been highly valued for its early ripening qualities. Unlike most early season varieties which fail to develop a full balance of flavors in their short ripening period, Carolina Red June has a high quality flavor making it a first choice for fresh eating and pie making. The tree is very productive and has an unusual habit of occasionally blooming twice in the same season, producing a second, smaller crop of apples in the fall. Fruit is small to medium with smooth, dark red skin and is slightly conical in appearance. The tender, fine-grained flesh is white and sometimes stained with red when eating. Ripens June to July and only a fair keeper. 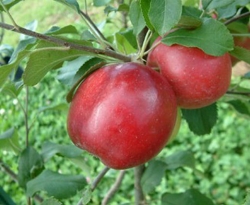