In 1830, Nancy Bryson of Macon County, North Carolina, planted seeds of Horse apple at her parent’s home located near the Cullasaga River and Gorge. The apples produced from this seedling tree received recognition as a high quality fruit by the renowned pomologist Silas McDowell and eventually introduced to the public through his efforts. Once widely grown in the South, it was considered extinct until the distinguished apple collector Lee Calhoun discovered the apple in 1989 growing in Macon County. Fruit is medium to large with tough, yellowish skin mostly covered with dark red and crimson. The skin will have a greasy or oily feel when ripe. Ripens late October to November. 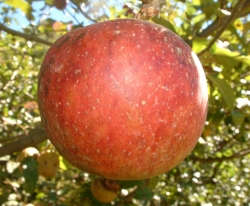