Early Harvest is believed to have originated in the 1700’s in Long Island, New York. It ripens over an extended period, grows well in all types of soil, and is prized for its great eating and cooking qualities. The fruit is small to medium in size with smooth, pale yellow skin with an occasional small reddish-orange blush on one side and whitish surface specks which darken as the fruit matures. The tender white flesh is crisp and juicy with a brisk, tangy flavor. Ripens June to July in most areas. 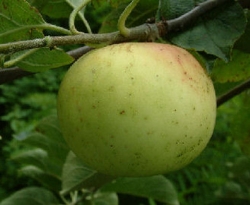