A very old apple with a very confusing history. Considered by many to be the same apple as Black Ben Davis, Gano was a very popular apple in the Blue Ridge Mountains of Virginia in the late 19th and early 20th centuries. First noticed in 1880, it was believed to have originated in either Arkansas or Missouri but this is not a certainty. This uncertainty regarding the true identities and origins of the two apples created a war-of-words in the early 1900’s with Arkansas claiming Black Ben Davis and Missouri taking credit for Gano. While we will never know the true ancestry of either apple, what we do know, according to Calhoun, is “that there is not a penny’s worth of difference between Gano and Black Ben Davis.” The light yellow skin is flushed and striped with light red which turns to purplish red when fully ripe. The yellow-tinged whitish flesh is firm, crisp and juicy with a rich, tangy flavor. Ripens in late September and stores very well. 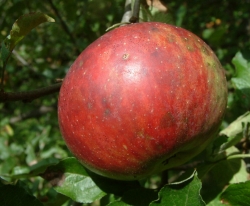 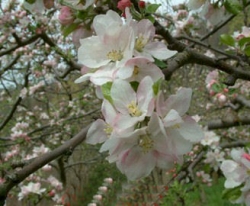