In 1839, Brinkley Hornsby first settled in Johnson County, Missouri, bringing with him apple seeds which he planted immediately on his new homestead. One of these seeds produced a seedling tree which first fruited in 1854. Referred to as his “dollars and cents” apple by Mr. Hornsby, it was later named Missouri Pippin and by 1869 was propagated and sold in St. Louis as Missouri Keeper. Noted for its very early bearing ability, it was a popular variety with commercial growers who used it as a “filler” tree in orchards before being removed to provide room for the primary varieties. Fruit is medium to large, roundish to conical and flattened on the ends. The thick, smooth skin is greenish-yellow mostly covered with dark and light red stripes and shading. The yellowish-white flesh is firm, coarse and breaking. Ripens November to December and is a good keeper. 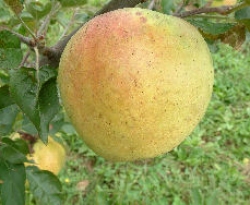