First described in 1900 by the Virginia State Horticultural Society. Not widely distributed, the apple was most popular in Tennessee and Kentucky in the early part of the twentieth century. Fruit is large to very large with pale greenish-yellow skin with an occasional red blush. Although not considered a first-rate dessert apple, it is an excellent cooking and baking apple. Mild flavored with firm, juicy flesh. Ripens in September in the mountains. 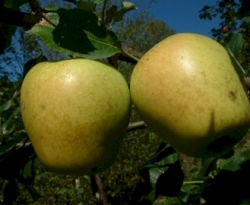