A very large fall apple supposedly originating in North Carolina according to an 1863 nursery catalog from Pennsylvania. It was described in an 1855 North Carolina catalog as, “one of the best large apples.” It is a fine processing apple as it holds its shape well when canned. This apple and White Bausel, another North Carolina apple, are probably identical to Gloria Mundi.  It has a very tart but pleasant flavor and ripens late September to early October. 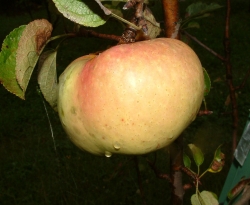