An apple of Virginia origin arising sometime in the 18th century, but never very well known or widely distributed. It is quite an attractive yellow apple popular for making a thick, dark yellow applesauce. It was also very popular for making apple brandy. It was said that if a grower had several Parmer trees in his yard, the neighbors knew he was most certainly making illegal brandy! Fruit is small to medium, conical-shaped, with deep yellow skin and irregular patches of russet all over. The dark yellow flesh is fine-grained, crisp, and subacid in flavor. Ripens July to August. 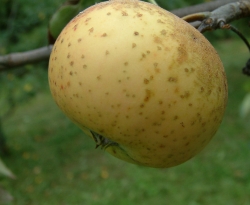