This is an old mountain apple with the unusual trait of having loose seeds in a hollow central core that makes a distinct rattling sound when the fruit is shaken. Known as Rattle Core in North Carolina, it is also known as Rattler in parts of West Virginia. Some older literature describe two other apples, Hollow Core Pippin and Rattle-Box, both of which may be the same apple as Rattle Core. Fruit is medium or smaller with greenish-yellow skin thinly striped with red. The white flesh is tender and juicy. Ripens September to October. 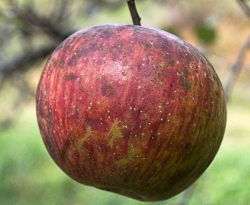