A very old and very attractive dark red apple brought to America in the 1700’s by early French settlers, probably as seedlings from Canada. The apple was noted in Canada in 1739. Beach describes Snow as one of the most desirable dessert apples of its season. It is indeed a very high quality dessert apple, but does not have the qualities of a fine cooking apple. Fruit is medium-sized with smooth greenish-yellow skin mostly covered with a deep red blush and lighter red striping. The juicy, aromatic flesh is very tender and very white, often streaked with red. Ripens September to October and is a good keeper. 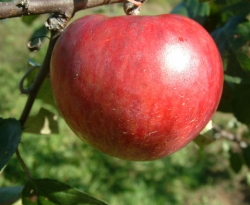 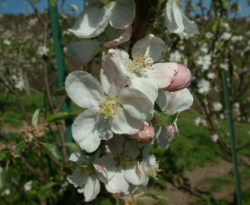