A very well known apple in the Southern Appalachians prized for its outstanding applesauce and apple butter. Wolf River is an enormous apple that originated with William Springer of Quebec, Canada. Springer left his home in Canada for Wisconsin around 1856, stopping along the way to purchase a basket of apples, believed to be Alexander. When he reached his new home near Fremont, Wisconsin, he planted seeds from the Alexander apples along the banks of the Wolf River. Thus was born one of America’s great apples. Fruit is very large and often irregular in shape. Skin is greenish yellow covered with splashes and stripes of red and carmine. The soft, tender whitish flesh is coarse-grained and moderately juicy. Ripens in September and is not a good keeper. 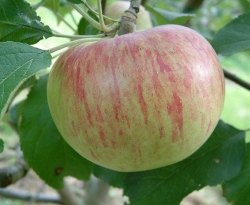