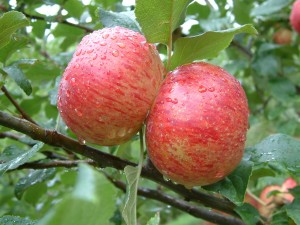 We first planted our Red Astrachan in the mid 1990’s with much excitement and anticipation. I had seen numerous photos of this stunningly beautiful apple and was captivated by various descriptions of this colorful fruit. Lee Calhoun, in the first edition of his monumental work, Old Southern Apples (1995), wrote: “Many old references state emphatically that Red Astrachan is the best of the early season apples.” S.A. Beach, in his 1905 classic, The Apples of New York, said Red Astrachan, when ripe and mellow, is “desirable for dessert use.” I was intrigued. If the flavor was a reflection of the apple’s beauty then I would be in for a wonderful taste experience when the tree produced its first fruit in a few years. As it turned out four years later when I plucked the first ripe apple from the tree, I was not to be disappointed.

In the early 1900’s Red Astrachan was, by far, the most widely distributed apple in the world. In the southern United States the popularity and availability of Red Astrachan was exceeded only by Winesap. It was at one time listed in nursery catalogs from every southern state, including Florida. Today this once immensely popular apple is relatively unknown, available only through collectors and a few specialty nurseries. Occasionally, someone will visit us at the Farmer’s Market and inquire about this apple or will share with us that they have a couple of old trees growing at home. This always surprises me. We seldom receive requests for this fine apple and very few people recognize the name when I bring it up in conversation.

The origins of Red Astrachan are a bit murky. While it can be confirmed the apple first arose in Russia, its history beyond this is unclear. It was believed to have been brought into Sweden from Russia and from there imported into England around 1816. Beach, however, says the apple was being grown in Paddington, England, and had already fruited there before 1816. The apple was imported into this country in 1835 by the Massachusetts Horticultural Society.

The color and overall beauty of this apple is what catches your attention when you see it for the first time. A fresh, well-ripened Red Astrachan is an absolute jewel, a very lovely red and crimson-striped apple with a distinctive white “bloom” or powdery coating over the skin similar to what you would see on a plum. One’s appreciation of the flavor, like most apples, is very subjective. Some people consider its flavor as only fair but I like its subtle tart-sweetness and firm crispiness. The crispness is short-lived, however, as the apple quickly becomes mealy if overripe. I have often enjoyed them slightly under ripe when the tart flavor is most pronounced.

Red Astrachan is not only a pleasant fresh dessert apple but is equally prized for its excellent cooking qualities, especially when used in baking apple pies. The white flesh is often tinged with red stains and streaks, a feature that produces a lovely red-tinged applesauce. Calhoun says the apple develops a strong quince flavor when cooked, a flavor especially pronounced in jelly made from this apple. I have not personally tasted quince in the cooked fruit but that’s probably because I have only cooked Red Astrachan just a couple of times. I suppose I’m too busy simply enjoying the fresh-picked fruit right off the tree!

The tree is quite vigorous in growth, a late bloomer and a reliable producer, seldom failing to produce decent annual crops but the yield will occasionally be on the light side. The fruit is susceptible to apple scab and is prone to cracking during especially rainy conditions. The apples ripen over an extended period in June and July.