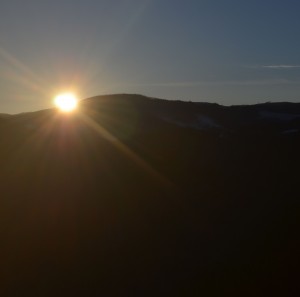 Sun On the Mountain

Summer officially arrived today (June 21st) at 6:51 a.m. EDT. Were you aware of this? Did you take a few minutes to pause and ponder the significance of this particular instant in time? I always try to be “in the moment” during these cosmic events, so I arose this morning at 6:30 a.m. to sleepily greet the summer of 2014. It was a gray, chilly morning with patchy fog, the result of rain and thunderstorms the previous evening. To brace myself against the unusual morning chill, I prepared a hot cup of coffee and then stepped out on the deck to contemplate the spin of the Earth in its travels around our star.

I marveled at how precise the motion of our world as it, more or less, maintains a delicate tilt of 23.5 degrees that gives us spring, summer, winter and fall. At 6:51 this morning the Sun reached its zenith in our sky after which it begins its slow, arcing descent into the long, dark days of winter. From our limited perspective, it’s almost as if Earth were fleeing the influence of the Sun, with every new sunrise occurring a little later and its position on the horizon falling imperceptibly by a few degrees every 24 hours. This race will continue in its urgency until December 21st, the winter solstice, when the Earth seeks to regain the intimacy of its relation with this life-endowing star and slowly, ever slowly, begins its gradual return and embrace of warmth and life.

There is a long and fascinating history describing the intimate relationship between human cultures and the natural progression of the seasons. As with all great celestial events of this nature, the arrival of summer has long been cause for joyous celebration and ritual among civilizations worldwide. For example, G.S. Hawkins, in his book, Stonehenge Decoded, explains why marriage is so favored in June in Western civilizations. Many ancient peoples believed that the “grand [sexual] union” of the Goddess and God occurred in early May. As it was considered extremely perilous to compete with powerful deities during this period, couples typically delayed marriages until June. According to Hawkins, in some traditions, “newly wed couples were fed dishes and beverages that featured honey for the first month of their married life to encourage love and fertility. The surviving vestige of this tradition lives on in the name given to the holiday immediately after the ceremony: The Honeymoon.”

Many Native American cultures participate in age-old sacred customs to celebrate the rebirth of the season of growth and productivity. On a couple of occasions, I have visited the Bighorn Medicine Wheel near Sheridan, Wyoming, one of about 50 or more ancient “solar observatories” scattered throughout the high plains of the Rocky Mountains. The wheel was constructed by Plains Indians (probably Lakota Sioux) between 300-800 years ago and was used to observe the movement of important dawn stars which helped foretell when the great ceremonial days celebrating the return of the Sun would arrive. These medicine wheels of the high Rockies are the North American equivalent of Stonehenge in England and were extremely important in maintaining the connection of people with the eternal cycles of the Earth and stars.

The beginning of summer sees life is in full stride here on the farm with lush tentacles of foliage and greenness of all hues extending endlessly from horizon to horizon. The apple trees, woefully lacking of fruit this season, nonetheless have stretched their leafy wooden arms skyward, gobbling up every ray of life-sustaining sunshine. The vegetable garden, initially slowed by the lingering effects of a cool, frosty spring, is frantically making up for lost time with a great burst of growth and vigor. Our aging but always dependable blueberry bushes are strong and healthy, holding a promise of flavor, color and aroma for us to savor later in the season. Much to my joy and astonishment, two fig bushes I planted a couple of years ago, which I feared were lost to the terrible cold of this past winter, have finally shoved a few timid, green shoots above ground. Surely a statement that life persists and will not be denied!

I hope you will pause for a moment on this opening day of summer to appreciate the wonders of the universe and how our fragile blue planet fits in this grand eternal scheme. To recognize the importance of the June 21st solstice, I share a short poem I wrote that expresses the significance of this special day. I hope your solstice was a special day for you, as well!

23.5 degrees.
That’s the tilt angle of the Earth
As it whirls in endless orbit
Around our life-giving star.
23.5 degrees,
Give or take a wobbly degree or two.
Such a delicate position
Gives our planet its seasons
And its capacity for sustaining life.

93 million miles.
That’s the distance from Earth
To our life-giving star.
93 million miles,
Give or take a few hundred thousand miles or so.
It’s quite a delicate position;
The perfect distance,
It would seem,
For life to flourish on this planet.

1 inch.
That’s the depth of the bean seed
I just planted in the garden on this summer morning.
1 inch
Of rich, fertile soil
Through which the sprouted seed,
Buried in a very delicate position,
Will struggle upward,
Seeking to break the surface
In search of light and warmth
Emanating from that life-giving star
93 million miles away.

We live
Only because the extraordinary balance
Of time, location and distance
From our life-endowing Sun
Ensures the proliferation of life
On this tilted blue planet
Which hangs, fragile, tenuous
In the dark void of space,
Suspended
In a very delicate position.