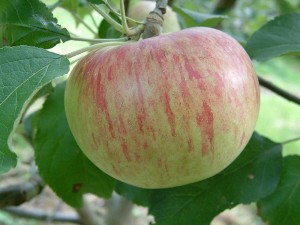 When apple experts and aficionados gather together and start talking about really large apples their conversations will invariably open with discussions about Wolf River, an enormous apple that can be a startling sight for the novice seeing one for the first time. Wolf River is truly one huge handful of an apple where 2-3 can be more than enough for a family’s apple pie!

Wolf River, with its mild, sweet flavor and ability to hold its shape when cooked, is indeed a wonderful pie apple but it really shines when turned into apple butter. Wolf River is a world-class apple butter apple and has long been cherished for the smooth, creamy apple butter it produces after hours of slow cooking. For generations families and friends and communities of apple lovers have gathered together in the fall to enjoy the friendship and camaraderie of making Wolf River apple butter. This timeless tradition typically takes place over the course of a full day where bushels of apples are cooked and simmered over an open fire with everyone taking their turn slowly stirring the bubbly, spicy, aromatic mixture in large copper kettles.

Wolf River is one of those old heritage apples with a long documented history that traces its beginnings from the shore of Lake Erie to its birthplace along the banks of the Wolf River near Fremont, Wisconsin.  Around 1856 William Springer packed his family and possessions onto a wagon and began heading south from Canada to Wisconsin. Somewhere en route he stopped along the shores of Lake Erie and purchased a bushel of apples, believed to be Alexander, itself an old apple originating in Russia and imported into this country in the 1800’s. (It’s a remarkable fact that we even know which variety of apple Mr. Springer purchased on his journey to Wisconsin!) When he reached his destination in Wisconsin, he planted a handful of Alexander seeds along the banks of the Wolf River that ran through the middle of his new farm. From these chance seedlings arose one of America’s greatest apples, Wolf River. It’s ironic that Mr. Springer probably never saw any of the apples as it is believed he sold his farm to a Mr. Henry Riflen before it fruited! 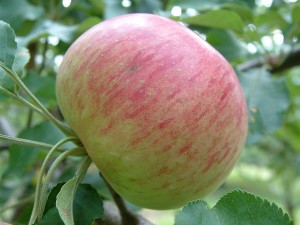 Wolf River resembles Alexander but is much bigger and flatter with darker shading and more red surface stripes than its parent. An interesting thing about Wolf River is its occasional ability to reproduce itself true-to-variety from seed. This is a very uncommon trait as nearly all apple varieties are self-unfruitful; i.e., they are unable to self-pollinate to produce apples on their own.  In order to produce fruit, their blossoms must be fertilized with the pollen of another separate variety. All the apples produced by the “mother tree” as a result of this cross-pollination will always be the same but the seeds of these fruits will be a genetic cross of both parent trees, the mother tree and the pollen-donating tree. These “hybrid” apple seeds are thus unable to grow into trees identical to the original mother tree, except in rare cases like Wolf River.

As you would expect, having originated and thrived in the bitter cold winters in Wisconsin, Wolf River is an extremely cold-hardy apple and one well-suited for raising in the coldest regions of the country. It also grows very well in the South and has always been a Southern favorite for cooking, baking and, of course apple butter making!

The superlatives of Wolf River are many. In addition to its adaptability and capacity to thrive in any soil or climatic conditions, it is more resistant to apple scab, cedar apple rust and fire blight than most apples. It is a very vigorous grower and tends to have a spreading growth habit. It can sometimes be biennial in fruit production although it seems to produce some quantity of fruit most every year.

If you want to see one of Nature’s more inspired creations, take a look at a Wolf River tree hanging heavy with huge, one-pound fruits! It is truly a stunning sight you will not soon forget!